The test pigging phase of the Enwave project was performed to ensure that the planned slip-lining operation was feasible.

The operation required that a 1600mm outer diameter test pig be constructed and subsequently pulled through an existing 1797mm (ignoring rivet heads and pipe joints) inner diameter, steel intake pipe, for a distance of 564m.  There were three significant “kinks” in the existing steel intake which were anticipated to create short-term spikes in the pulling force required to advance the pig.

At the offshore end. divers cut and broke out a 30m long section of the existing, concrete-filled, twin steel sheet pile wall structure which encased the existing intake, as well as removing a corresponding length of the 15.9mm wall steel intake pipe to create the access for the pig.  The divers also cleaned the existing intake of debris and facilitated pulling the wire rope from the on-shore winch to the access point.

Access at the onshore end was located in a steel sheet pile pit which Dean had installed and excavated prior.  A 27m long section of the existing intake pipe was removed.

The 21.6m long test pig was constructed of HDPE pipe and custom fabricated steel pulling heads that were engineered for safe pulling tension of 30t.  The pig was also ballasted to achieve slightly negative buoyancy when filled with water.

The pig was taken to the site by barge and lowered into position at the diver-created access.  The wire rope was connected to the pulling head and pulling commenced.

The pulling force was applied using a Manitowoc 390 winch equipped with 38mm wire rope and a pair of sheaves mounted on a 1020mm wide-flange beam to permit the pulling force to be directed horizontally under the level of Lake Ontario and directly into the existing intake.  The pulling force was monitored in real-time and recorded using a tensionometer which was wirelessly connected to a laptop.  Information gained from this was used to develop the required methodology for the required slip-lining operation.

The test pigging operation was successfully completed on July 11, 2021 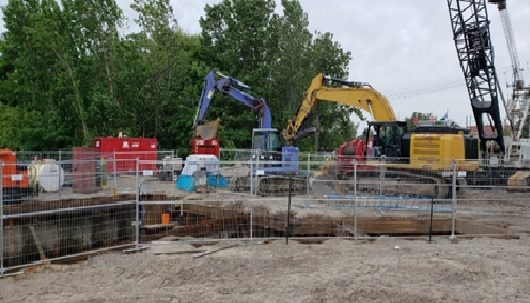